The Link Between Blessings & Gratitude

It is reported that ʿAlī b. Abī Ṭālib رضي اللّه عنـه said:

"Blessings arrive with gratitude [to Allāh], and gratitude is connected with more [blessings], and the two are tied together: more blessings from Allāh will never stop unless gratitude from the servant stops."

It is reported that ʿAbdullāh b. Masʿūd رضي الله عنه said:

The dangers of bid’ah

An example of the fiqh of the Sahabah with regards to the dangers of bid’ah is illustrated by the narration of Hudhayfah Ibn Al- Yamaan (رضي الله عنه) and what he said to his companions and students when he took two rocks and placed one on top of the other and asked them,

He told them, “I swear by Him whose Hand my soul is in, bid’ah will appear until you do not see from the truth except that which is equivalent to the amount of light you see between these two rocks. I swear by Allaah, that bid’ah will spread so much so that if a person leaves it, it will be said about him that he left the Sunnah.”

Imam Malik ibn Anas رحمه الله (d. 179 A.H.)  said:
‘If a person meets Allaah with the equivalent of the earth in sins, but meets[1] Allaah while upon the Sunnah, then he will be in Paradise with the Prophets, the truthful, the martyrs, the righteous and how excellent are these companions.’
[Dhum al-Kalam wa Ahlihi 5/76-77]

Yahya bin Jafar رحمه الله said:
‘If I had the capability to increase the age of Muhammad bin Ismaeel -i.e. al-Bukhari- taken from my age I would have done so, since indeed my death is the death of one man, but his death was the going away of knowledge.’
[Tareekh al-Baghdad 2/24]

The importance of Seeking knowledge -1

Lecture given to the sisters at Masjid al-Imaam Muqbil (UK)

The Messenger of Allaah صلّى اللَّهُ عليه وسلّم said,
"Whoever takes the path hoping for knowledge, Allaah سُبحانه وتعالى makes easy for him the path to Paradise. Verily, the angels lower their wings for the seeker of knowledge out of pleasure of what he is doing. Verily all that is in the heavens and earth seek forgiveness for the knowledgeable, even the fish in the water....."
(Abu Dawud & At-Tirmidhi)

Sufyan ath-Thawri's letter to his brother

The following is one of Imaam Sufyaan’s letters:

My brother, use the time you have between dawn and sunrise to contemplate the previous day: Remain steadfast on the good deeds you performed the previous day, and abandon anything you did out of disobedience to Allaah (سُبحانه وتعالى). Do not repeat the same mistakes, for you do not know whether or not you will live for the rest of your day! As long as you are alive, the option of repentance is available to you, but refraining from sinning is easier for you than trying to perform a sincere repentance. A sincere repentance involves regret and a firm resolve never to repeat the same sin again.

Wherever you are, fear Allaah. If you perpetrated a sin in secret, then repent to Allaah in secret. And if you perpetrated a sin out in the open, then repent to Allaah out in the open. Do not let one sin lead to another (so that they pile up onto one another). Cry frequently and as much as you are able to, and do not laugh (frequently), for you were not created without purpose. Join ties with and be kind to your family, your relatives, your neighbors, and your brothers.

The modern state of Iran is officially an Ithnaa’ashariyyah (Twelver Shiite) state, where 90-95% of the people there are Twelvers, also known as Raafidhah, Imaamiyyah, or Ja’faree Shias.

Sheikh ‘Abdul-‘Azeez ibn Baaz (رحمه الله) identified this specific sect as the most dangerous of all Shia sects. He said:

…The Shiites have many different sects, each one having a variety of deviations. The most dangerous of them is the Khomeinian Raafidhah Twelver Sect (the official religion of Iran), due to the large number of their missionaries and all the major acts of polytheism found in it, like seeking help from the (deceased) Prophetic family members, believing them to have knowledge of the Unseen, especially the twelve imams, as they claim. This is also due to their expelling the majority of the Companions from the Religion and their abusive speech toward them, the likes of Aboo Bakr and ‘Umar (may Allaah be pleased with them). We ask Allaah for safety from the falsehood they are upon…
Source: His Fatwaa Collection (4/439). (Arabic)

Sheikh Ibn Baaz was also asked about the concept of Ahlus-Sunnah coming together with the Raafidhah Shiites. He replied:
Read more »
Posted by Umm Hasna at 8:17:00 PM No comments:

1) Imitating them in dress and lingo;

2) Residing in their lands and not moving from their lands to the lands of the Muslims to save one’s Deen (i.e, hijrah);

3) Travelling to the lands of the kuffaar for tourism and vacation;

4) Helping them, giving them victory over the Muslims, speaking well of them and defending their honour;

5) Seeking their aid, trusting them, putting them in positions to know the secrets of the Muslims and making them advisors;

The Divine decree is always a bounty!!!

Unfortunately, due to the ignorance of the worshipper, and his transgressions, he does not consider anything to be a gift or a blessing or a cure unless he can enjoy it immediately, and it is in accordance with his nature. 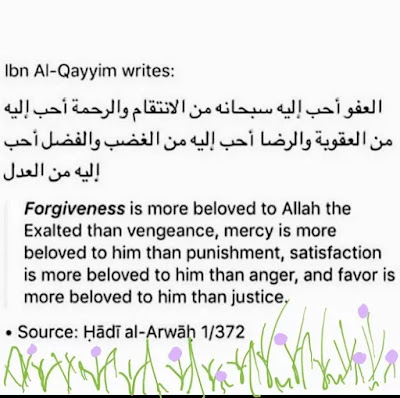