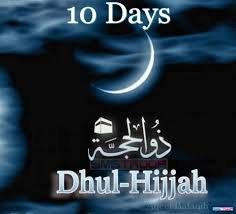 From what is considered as righteous actions on these ten days is that the one who wants to do the Udhiyyah (sacrificial slaughter) should NOT cut his hair or nails during these ten days. As such, it is desired that he commits himself before these ten days by cutting his hair and nails.

"When any one of you intending to sacrifice the animal enters in the month (of Dhul-Hijjah) he should NOT get his hair or nails touched, (cut)."
[Muslim]
Posted by Umm Hasna at 12:01:00 PM No comments: