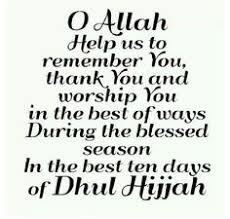 Sheikh-ul-Islaam ibn Taymiyyah (رحمه الله) was asked as is mentioned by Ibnul Qayyim, “Which is more virtuous & beneficial, the 10 days of Dhul Hijjah or the last 10 days of Ramadhan?”

“… And if the intelligent and noble one was to reflect upon this answer, he would find it satisfactory and sufficient. For indeed, there are no days (in the year) more beloved to Allaah سُبحانه وتعالى that righteous actions are done within them than the 10 days of Dhul Hijjah, since within them are the days of Ara’faah (9th day of Dhul Hijjah) and the day of Nahr (10th day) and the day of Tarwiyah (8th day). As for the 10 nights of Ramadhan, they are the nights of revitalization which the Messenger صلّى اللَّهُ عليه وسلّم used to be up in awakening within them all, and within it is a night which is better than 1000 months. So whoever answers without such an elaboration, then he is incapable to prove his statement with authentic evidences.”

(Taken from the book bada’ee Al-Fawaaid of ibnul Qayyim – under the chapter ‘the preference between Aa’isha & Fatimah.’)
Read more »
Posted by Umm Hasna at 2:48:00 PM No comments: 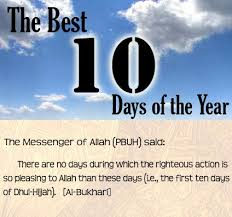 (Fasting on the day of Arafah is an expiation of last year’s and next year’s sins.)

One may then feel compelled to ask where has the tradition of fasting the first 9 days come from?

The answer is that it is taken from the generality of the hadith of Ibn Abbasرضي اللّه عنـه that the Messenger صلّى اللَّهُ عليه وسلّم said:
Read more »
Posted by Umm Hasna at 1:31:00 PM No comments:

Ten Points for the First Ten days of Dhul-Hijjah

2. It is permissible to fast the first nine days of Dhul-Hijjah with the last day being the day of Arafah for those not doing Hajj. The Prophet صلى الله عليه و سلم said in a hadith narrated by ibn Abbas رضي الله عنهما (in at-Tirimidhi):

“There are not any days that good deeds are more beloved to Allaah than those done in these ten days.”

3. In these days, it is recommended that there is a lot of remembrance of Allaah سبحان و تعالى - this is for all of the ten days.

4. In these days, it is recommended that one makes takbir of Allaah (saying Allaahu akbar) - this is for all of the ten days.

5. In these days, it is recommended to read the Qur'aan as much as possible and give charity - this is for all of the ten days.

6. The ninth day is the day of Arafah. The Messenger of Allaah صلى الله عليه و سلم said in an authentic narration:

“Verily on the day of Arafah there is expiation of sins for the year before and the year after.”
(Abi Qatada رضي الله عنه, reported in Sahih Muslim and At-Tirmidhi).

So therefore it is a great day, so it is recommended to fast that day for those not doing Hajj. Fasting is only permissible for the first nine days as the tenth day is the day of Eid.
Read more »
Posted by Umm Hasna at 11:40:00 AM No comments:


_________________
Audio:
Click the link Audio Duroos on your right to access our new site, or Ahsan Qawl for original audios. Also checkout our new AUDIO page.