Question: May Allaah be good to you! The insults against the Prophet صلّى اللَّهُ عليه وسلّم have repeated itself in different forms from films, newspapers, and others in recent times. The question is, 'what is the legislate stance on these insults and also what is the ruling on expressing anger with regards to insults to the Prophet صلّى اللَّهُ عليه وسلّم by means of protesting ? 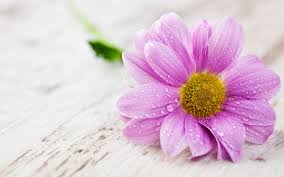 ·     Both these words  قَتَّلَ (Qattala) and دَقَّ (Dakka) have shaddah. What is the difference between the two words in relation to the shaddah?

In:قَتَّلَ
The shaddah in the word Qattala on the ع al-kalima indicates an extra letter i.e. the  ت.  This is considered المَزِيد ثُلاَثِيْ .

In:  دَقَّ
There is NO extra letter in this word. Rather, it is a 3-letter root. This word is considered  مُجَرَّد ثُلاَثِيْ.


The shaddah in a word could indicate one of two things (depending on the number of letters in a word) as illustrated in the example in the above two words:

Is It permissible to Portray any of the Sahaabah in Movies, Plays, etc. ? 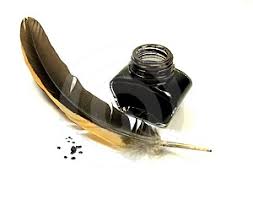 Portraying the Sahaabah or one of them is forbidden, because it is disrespectful towards them, lowers the esteem in which they are held and exposes them to criticism, even if it is thought that this serves a purpose, because the negative consequences to which it leads outweigh any benefits, and anything of which the negative consequences outweigh the positive is definitely forbidden. A statement was issued by the Council of Senior Scholars stating that this is forbidden.

To further emphasize this point, we shall quote the statement of the Council of Senior Scholars on which all its members were unanimously agreed, the text of which follows:

1. Allaah, may He be glorified and exalted, praised the Sahaabah and affirmed their high status. Presenting the life story of any one of them in the form of a play or movie is contrary to Allaah’s praise of them and detracts from the high status and honour that Allaah, may He be exalted, granted them.
Read more »
Posted by Umm Hasna at 11:03:00 AM No comments:

Seek protection from laziness & from not having the capability to do an action. 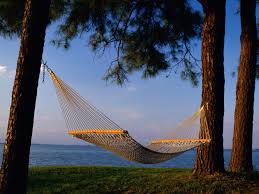 The Prophet صلّى اللَّهُ عليه وسلّم used to seek protection from laziness and also from not having the capability.


"When your companion becomes angry and says something that is unwarranted, you should not take it too hard. His situation is that of a drunken person who is not aware of what is taking place. Instead, be patient, even if it means only for a little while. If you reciprocate his words with harsh words of your own, you become like the sane person who seeks revenge on a madman, or the conscious person who seeks retribution from an unconscious one. Look at him with a merciful eye and pity him for his actions."

Is Disobedience a cause for the destruction of the Ummah? 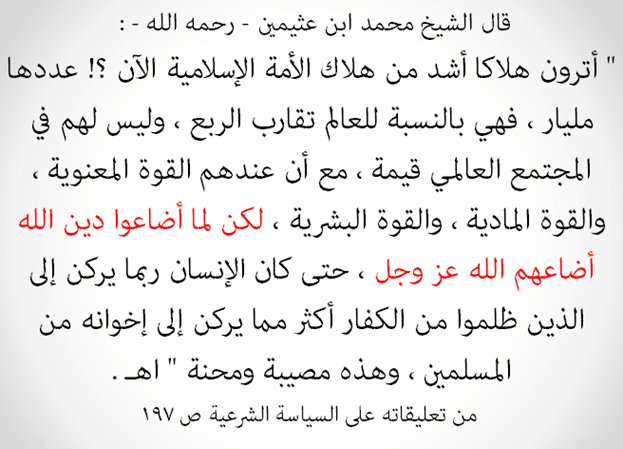 “Do you see any destruction more severe than the destruction of the Ummah nowadays? They are Billion in numbers, they are nearly one-fourth of the world population, but they have no value in the global community in spite of having moral force, material power and manpower. But when they neglected the Deen of Allaah, Allaah سُبحانه وتعالى forsook (renounced) them, so that a person trusts1 the oppressors among the Kuffâr more than he trusts1 his own brothers among the Muslims – and this is an ordeal and a calamity.”

What are the THREE conditions which are tokens of the servant’s happiness ??

Three conditions are tokens of the servant’s happiness [sa’adat al-abd], and the signs of his success in this world and the next. No servant is without them, but is always shifting from one to the other.

1. When blessed, he gives thanks (Shukr);
2. when tried with difficulties/trials, he perseveres (Sabr); and
3. when sinful, he seeks forgiveness (Tawba).

1.     Shukr for blessings: The first condition is the blessings which come to the servant from Allaah سُبحانه وتعالى, one after another. What secures them is gratitude [Shukr], based on three supports: (a) inward recognition of the blessing; (b) outward mention and thanks for it; (c) and its use in a way that pleases the One to whom it truly belongs and who truly bestows it.

What is our Aqeedah? What is Sunnah? Who are the Salaf? MUST READ !!

What does سُنِّية سَلَفِية  mean ?
It means we, (the Muslims) take our Deen from the Sunnah & from the Salaf.

The daleel (proof) to call ourselves Sunni is the following hadeeth:

The Messenger of Allaah صلّى اللَّهُ عليه وسلّم gave us a sermon by which our hearts were filled with fear and tears came to our eyes. So we said, “O Messenger of Allaah! It is as though this is a farewell sermon, so counsel us.” He صلّى اللَّهُ عليه وسل said, “I counsel you to have taqwa (fear) of Allaah, and to listen and obey [your leader], even if a slave were to become your ameer. Verily he among you who lives long will see great controversy, so you must keep to my Sunnah and to the Sunnah of the Khulafa ar-Rashideen (the rightly guided caliphs), those who guide to the right way. Cling to it stubbornly [literally: with your molar teeth]. Beware of newly invented matters [in the religion], for verily every bid'ah (innovation) is misguidance.”
(Tirmidhi)
The Prophet صلّى اللَّهُ عليه وسلّم is clearly commanding us in this hadeeth:
عَلَيْكُمْ بِسُنَّتِي - It is upon you 'My Sunnah!'

The Sunnah means 'the way, the path' -- the way of the Prophet صلّى اللَّهُ عليه وسلّم and the four righteous leaders i.e. the caliphs.

عَضُّوا عَلَيْهَا بِالنَّوَاجِذِ  - means Cling to it stubbornly [literally: with your molar teeth]. This shows how tightly and firmly we must hold onto the Sunnah of the Prophet صلّى اللَّهُ عليه وسلّم.

When we say   سُنِّية , the   ' ي '  means that you are attributing and connecting yourself to the Sunnah (the Path) of the Prophet صلّى اللَّهُ عليه وسلّم and the Salaf (our pious predecessors).