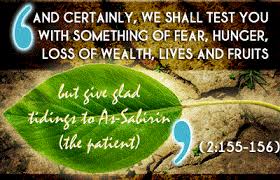 Allaah afflicts a servant with trials until he becomes honorable

“Were it not that Allaah the Exalted cured His servants with the medicine of tests and trials, they would transgress and commit evil. When Allaah the Exalted intends goodness for a servant, He makes him drink the medicine of tests and trials from providence according to his situation in order to cure him from deadly diseases, until He purifies him and cleans him and he achieves the most honorable status in the world, that of being a true servant of Allaah, and he is given the GREATEST reward in the Hereafter, that of seeing Allaah and being close to Him.”

Ikhlaas cannot be achieved except after having Zuhud

"Sincerity is not combined in the heart along with the love of being praised by the people and being commended by them, and also having greed for what the people have, except like water being combined with fire."
[Al-Fawaaid 267]
Posted by Umm Hasna at 1:46:00 PM No comments:

Allaah is able to do all things!

Your Hamm...! Sincere Advice to sisters

“O sisters, Upon us is to have mercy upon ourselves. Save yourselves from the Fire. There is no way out for anyone from the Fitnah that we are in now, except by sticking to what the Prophet (صلّى اللَّهُ عليه وسلّم) came with.”

“There is no way out for anyone except by sticking to the Sunnah which the Prophet (صلّى اللَّهُ عليه وسلّم) came with. This holding requires submission, a complete submission. As believers, it is a must on us. We have to say regarding any command from Allaah سُبحانه وتعالى and HIS Messenger (صلّى اللَّهُ عليه وسلّم), “Sami’naa wa ata’naa,” (We hear and we obey), and not like the Yahood (Jews) who said, “We hear and we disobey.”

“O sisters, the truth is very heavy. Falsehood is light (easy to accept). It is very heavy, except for those whom Allaah made it easy and guided them for that.”

“Your nafs are always wanting if you make it a habit. If you control and limit yourself, that is what your nafs will get used to.”

“Do not say ‘why’ to the command of Allaah.” Umm ‘Abdillaah (حفظها الله), gave the example of Salaat by saying; “Pray and get used to it. We are commanded to Fast, so you must Fast, make Hajj and ‘Umrah. HE, سُبحانه وتعالى, has made certain things compulsory towards the husband and we do not say why.”

“O sisters, it is up to us to preserve our tongues, especially because the Prophet (صلّى اللَّهُ عليه وسلّم) told us the reason why women are the majority in the Hell Fire. Be more careful than men. Women curse a lot and have many complaints. It is not a good habit to complain to this sister, that sister, to this one, and that one. Guard your tongue.”
Read more »
Posted by Umm Hasna at 9:44:00 AM 3 comments:

Trees of the Heart 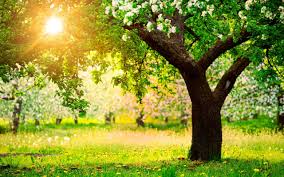 Ikhlaas and Tawheed are a tree in the heart. Its branches are the actions, and its fruits are the good life in this Dunyah and everlasting bliss in the Aakhirah.


And just as the fruits of Jannah are neither cut off (by change of season) nor out of reach, likewise is the case with the fruits of Tawheed and Ikhlaas.

And Allaah سُبحانه وتعالى has made mention of these two trees in Surah al Ibrahim:

"See you not how Allaah sets forth a parable? A goodly word as a goodly
tree, whose root is firmly fixed, and its branches (reach) to the sky
(i.e. very high). Giving its fruits at all times, by the leave of its
Lord, and Allaah sets forth parables for mankind in order that they may
remember. And the parable of an evil word is that of an evil tree
uprooted from the surface of earth, having no stability 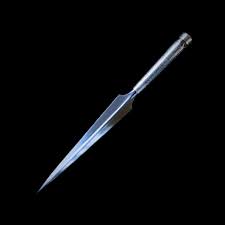 An important part of our history is the clarification of the lies and innovations of the Raafidah which surrounds the death of the grandson of the Messenger of Allaah صلّى اللَّهُ عليه وسلّم Hussein Ibn Ali (رضي الله عنهما) Taken from the books of the Ulemaa of Ahl-As-Sunnah.﻿

Light on the tongue, heavy on the scales 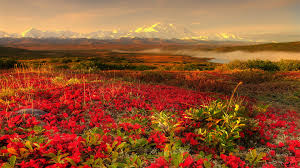 Abu Hurairah رضي اللّه عنـه reported:
The Messenger of Allaah (ﷺ) said, "There are two statements that are light on the tongue to remember, heavy in the Scales and are dear to the Merciful: 'Subhan-Allaahi wa bihamdihi, Subhan-Allaahil-Azeem.'
[Glory be to Allaah & His is the praise, (and) Allaah, the Greatest is free from imperfection]'.
[Al-Bukhari & Muslim]

The reward of those who have a heavy scale is mentioned by Allaah سُبحانه وتعالى
in His Noble Book:

فَأَمَّا مَن ثَقُلَتْ مَوَازِينُهُ
فَهُوَ فِي عِيشَةٍ رَّاضِيَةٍ
'Then as for him whose balance (of good deeds) will be heavy,
He will live a pleasant life (in Paradise).'
(Al-Qari'ah 101:6-7)
Posted by Umm Hasna at 12:41:00 PM No comments: