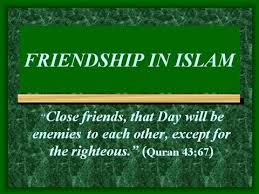 One of the greatest things that helps the Muslim to have piety and uprightness on the path of truth and guidance is keeping the company of good people and avoiding evil company, for man, by his nature, gets influenced by his friends and companions and adopts their characters and manners.

Also, man’s character is known through his brothers and friends as pointed out by the Prophet when he said,

“A man is on the religion of his friend, so let every one of you examine whom he befriends.”
(Reported by Abu Dawood)