Shaitaan says : “If you miss him now , you will never catch him again....” 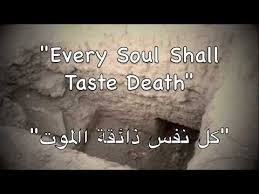 When death befalls someone, he should know that it is an hour of serious suffering because it is a moment of severe pain, when he is leaving all objects of love, his loved ones, and to all that the horror of the throes of death and fear of where his wealth go. Then Shaitaan comes and attempts to have the slave [of Allaah] become discontent with his Lord, he tells him ‘Look at you! What made you die? Is it painful? You are leaving your wife, your children and you will be laid under the ground? So he might cause him to become discontent with his Lord, hating Allaah’s decree, making him say things that include any kind of objection, or he might make him unjust in his will, giving some of the inheritors preference over others, to on and so forth. In this case, we need to cure the whispers of Shaitaan and cure the self .

In that minute Shaitaan tells his assistants,

“His seeking refuge in the ‘floundering of Shaitaan at death’, that is if Shaitaan seizes him when he leaves this world, preventing him from repenting or hinders him from mending his affairs, leaving an injustice or he makes him despair from the mercy of Allaah or makes him hate death or be sorry for this life, so he becomes discontented with Allaah’s decree in dissolution, going to the hereafter, so one has a bad end and he meets his Lord while he is discontented with Him.

It was narrated that the Shaitaan is never tougher on a man as in death and he tells his assistants: ‘Take this person! if you miss him today you will never catch him again.’ We seek refuge in Allaah from his evil, we ask him to bless our death and to have a good end.”